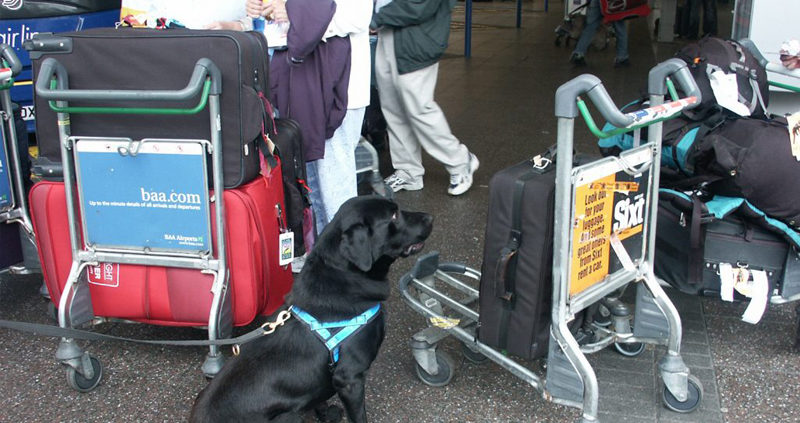 With an increase in terrorist activities and drug smugglers there has been a growing need for airports to develop their security operations. Detection dogs are quite often brought in to help detect illegal substances such as drugs and explosives.

How do detection dogs detect the substance?

Detection dogs are used at airports for a number scenarios. They sniff passengers and hand luggage at security checkpoints and if someone reports a suspicious package or incident on a plane, bomb dogs sniff the aircraft, its passengers and its cargo hatch.

When the dog finds a scent, it leads the handler toward the source and the universal sit signal tells the handler that it has found something. If you’ve ever watched a sniffer dog at anÂ airport, you may have noticed that it works in silence, with neither a word nor a bark is exchanged between the dog and its handler.

What substances can detection dogs find?

Itâs not surprising that detection dogs are used at airports due to their ability to detect the following substances within luggage and on the person:

No matter how much the traveller tries to conceal the substance, detection dogs are trained to detect illegal odours when they are tightly sealed or deeply hidden. They can identify individual scents even when the scents are combined or masked by other odours.

Why use detection dogs for airport security?

There is no denying that detection dogs cannot replace humans when it comes to airport security but what they can do is provide that extra security measure. Even though humans smell using most of the same equipment as dogs, there are differences. Dogs are better than us at sucking in odours. Their noses are longer and roomier than ours, so they can inhale more air per sniff.Â Detection dogs also have 20-40 times more odour receptors in their noses than we do.

Detection dogs and their handlers have also been known to patrol airport security lines to reduce waiting times when going through security, without having to remove their shoes, empty their bags or experience the dreaded pat downs.

How are detection dogs trained?

Detection dogs learn the basics in between two and four months. Although they’ll undergo testing and retraining throughout their entire careers to make sure their skills remain sharp. Detection dogs are trained to learn a sequence, they would sniff the area, find theÂ substance, sit and get a toy for good behaviour and this would be carried out in the same surroundings as to where they would work. Dog handlers would train alongside the sniffer dogs, learning to watch and lead their canines.

Detection dogs are not only used to sniff out drugs and explosives but can also be used for a number of other operations.

The UK Telegraph reported that KLM hired a sniffer dog named Sherlock to help reunite passengers with their lost mobiles and valuables. Itemâs such as mobiles, headphones and toys were attached to the dogs back who then tears through Amsterdam Schiphol Airport in search of their rightful owners. “It’s a lot of fun. Personally, I think he’s a real asset to the company,” says Chantal Kremer, of the airline’s ground services department. “He can really do something no-one else can.”